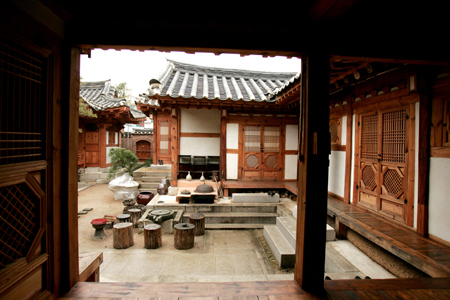 A view of the Rakkojae hanok in Bukchon, Seoul, once a guests steps through the entrance.

Bukchon in Seoul is a mixture of the hip and quaint.
The main road is dotted with cute, standout restaurants, shops and cafes.
Meander through the narrow alleys in the back, however, and one time-travels to the 1970s and early ‘80s — a time of hole-in-the-wall shops and “hanok” or traditional Korean houses.It’s within this sliver of Seoul and its vast passage of time that a local company, kozaza is working with a new-era concept of “sharing economy” to promote the beauty of olden times. There are around 90,000 traditional houses remaining in Korea. Kozaza — the name fittingly means “let’s get a good night’s sleep” — links 700 of these with visitors desiring a stay. Jo has been a forward promoter of the traditional Korean house, providing content on hanok to Google’s Cultural Institute, a 360-degree preview of a hanok with Google Maps, and postcards. 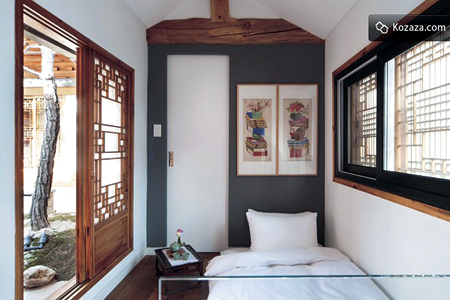 It’s one of the rooms available for a hanok stay through kozaza.

“Staying in a hanok is more than a night’s accommodation, you can experience Korean traditional culture and lifestyle,” said Jo San-ku, founder and CEOof kozaza.
What the relatively new company is also doing is spreading the “sharing economy” model in society here. Around 70 Korean firms are engaging in the model including Socar, which is a car-share operation; Kiple that purchases and resells children’s clothes online; and the social dining company Zipbob. “Zipbob is more about sharing talent, I would say,” said Park Lynn, founder of the social dining club. As there are a rising number of singles, Zipbob brings members, usually early 30-something females, to congregate for a meal or a session of drawing or learning how to make craft beer. Zipbob users create profiles, chat online and find people who with similar interests after which they can organize dining experiences. Park like Jo started her business based on sharing economy around 2012. Jo is one of the early adopters of the “sharing economy” model here. Having founded and operated NetGeo in Silicon Valley in the 2000s, he worked at leading Korean conglomerates before founding kozaza. 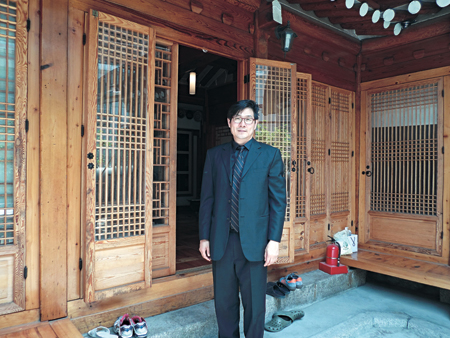 Jo San-ku, founder and CEO of kozaza, poses during an interview with The Korea Times.

When he set out to found a business in Korea, he met a lot of naysayers who said that Koreans don’t like to open up their houses or that the house structure in Korea was not oriented toward sharing.
“The biggest hurdle was the Korean mindset that they don’t want strangers in the house” said Jo. “But the mindset is changing.” A recent survey by Nielsen validated Jo’s argument. The survey found that one out of two Koreans (49 percent) were willing to rent goods or services through a shared economy for financial purposes. Respondents were most willing to share clothes (25 percent) and electronic goods (25 percent), but also outdoor camping goods (23 percent) and cars (19 percent). “Sharing the hanok is within the bigger context of a sharing economy but also a pride for Koreans,” he added. Jo had a special guest last year Google executive chairman, Eric Schmidt, who visited Chiwunjeong, the former residence of ex-President Lee Myung-bak for several hours. “Schmidt came in the fall so all the doors and the windows were open, so he noted how the wind and the sun ‘go through’ the house,” said Jo. He noted that hanok stays can now be expanded as “alternative” accommodation to hotels that foreign participants attending global conferences held in Seoul could make use of. His company recently hosted participants to the Global Hackathon, which was part of the SBS Digital Forum hosted by the capital.
“About 130 participants stayed at 65 hanok together for four days, which allowed them to brainstorm and enjoy Korean zither performances in the evening. It was like a journey rather than just sleeping in a hanok,” said Jo. “This experience demonstrates that we can host global conference participants in hanok.”
For the future, kozaza is also looking to secure 100 home-stay residences within the 29 districts of Seoul, fit to accommodate businesspeople. Rooms available in Seoul total 30,000, so kozaza, working with the Seoul Business Agency and the Seoul Metropolitan Government, would be able to increase that number by 10 percent.
The real allure of kozaza or other sharing economy models may be in its philosophy.
“The sharing economy is all about by the people, of the people and for the people,” Jo said. “In a sharing economy, a powerless individual is providing value.”
He said Kozaza as an example of expanding value creation. Jo and his four employees link hanok owners with guests who are willing and interested in choosing the traditional Korean house as accommodation. Both the host and guests would like a memento. So the Seoul City Government supports amateur artists drawing depictions of hanok, which are made into postcards and distributed to both the host and guests. Bukchon village, a popular tourist destination, finds the postcards memorable souvenir items so they are sold at shops.
“So it’s good for everyone, the host, the guests, Bukchon community, the artists and Kozaza. By sharing the theme of hanok and by doing what each party wants to, we’re creating a new value culture,” Jo said.
It’s a “pay as you live” model that will become a new lifestyle, he added confidently.
For a young company, kozaza is actually being enhanced by the soaring popularity of Airbnb; but it ambitiously hopes to “disrupt its business model within this year,” Jo said.
The stay at a hanok is not cheap per se. For two people sharing a hanok room, they should be prepared to pay an average of 110,000 won per night. The most expensive is 1.5 million won per room for two people at Chiwunjeong. In between is another “fine” hanok, the Rakkojae, where the rate is around 200,000 through 300,000 won per night.
“A hanok is petite, with no privacy and the toilets sometimes placed outside. Those who appreciate the value of hanok’s architecture and design should come,” said Jo.
“Bukchon is singular in Seoul. You can find a Gangnam in any big city. Palaces, you can find them anywhere too,” said Jo. “But it’s hard to find a habitat of the commoners.”­